To start with, I established why painting (out of all the choices we have today) could possibly be the medium of choice when expressing death. Through numerous pieces of prose by other painters and my own experience, there are various points of discussion to be had, particularly the questions of What aspects of it make it individual, and how is it different from a practice such as photography? How does one ‘read’ a painting, and what makes it successful or interesting?

As host this week I focused specifically and deliberately on painters of varying technical skill throughout the 20th/21st Century who had experienced grief and loss, and whether this had affected their work. A question I wanted to open up for discussion was, “if they were affected, how did it change their way of painting?” Painters that were brought up in the discussion included Edvard Munch, Francis Bacon, Marlene Dumas, Picasso, Justin Mortimer and briefly, myself – which gives an idea of how varied I wanted the work to be. It is notable to point out that each of these artists have all experienced loss in a completely different way, under various circumstances. Munch lost his sister, Bacon his partners, Picasso his friend, and Dumas her mother.

These all turned out to be pivotal in deciding the direction of their artistic careers. Munch experienced the death of his sister very early on within his career, and this would then turn out to be an incident that would haunt him for the rest of his life. This has been portrayed in the work ‘The Sick Child’, the composition of which was constantly revisited throughout his entire life. The piece is a portrayal of his sister, Sophie, sitting up in bed at the time of her illness. Munch seemed to want to recreate this scene just before her death ‘perfectly’, but apparently never could, as seen by his numerous attempts. At this point it should be noted that more traditional methods of making art (sculpture, printmaking, painting) were the only things available to make an image, however this did not stop Munch straying from the norms of ‘classical’ painting at the time, as we can see through his fluid, rapid brush marks. 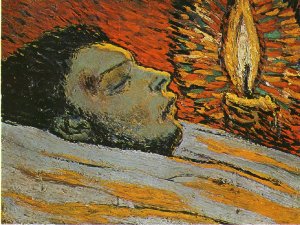 This hurried, expressionistic style is also seen in Picasso’s painting of his friend Casagemas lying in a coffin, after committing suicide at the age of 20. It is argued that this event heavily inspired his ‘blue period’, with Picasso noting that “Thinking of Casagemas being dead makes me paint in blue“.

Here we can see a (perhaps obvious) correlation beginning to present itself – a single, substantial traumatic event resulting in loss, which proceeds to resonate with the artist, changing the way they think and work. Francis Bacon often said that he was chased by bad luck (or “furies”, as he named them) – and was constantly surrounded by the threat of extinction. His attitude towards life was usually commented upon with dark wit and dry humour:

“I am a painter of the 20th century: during my childhood I lived through the revolutionary Irish movement, Sinn Fein, and the wars, Hiroshima, Hitler, the death camps, and daily violence that I’ve experienced all my life. And after all that they want me to paint bunches of pink flowers.”

Though many of his friends and colleagues died over the years, the ones that most notably affected him were the deaths of his lovers, Peter Lacy and George Dyer. Dyer’s suicide the evening before the opening of one of Bacon’s exhibitions left him distraught. Though Bacon was often cynical and did not speak particularly openly about his many losses, this changed with the production of ‘Triptych May-June 1973’.

Other painters that were touched upon throughout the session included the work of Justin Mortimer, Jenny Saville and Daphne Todd, whose works are all, in some way, commentaries on mortality. Many of these use transference to create a discussion around mortality: Mortimer and Saville’s most well-known works do not use any references in which the artist is familiar with the subject being painted. Many are extremely detached – which creates an interesting discussion into whether this ‘barrier’ is a product of over-saturation of troubling news articles, as well as the almost chronic fear of death in today’s society. I noted that despite this trend, Todd in particular is interesting due to her literal painting ‘Last Portrait of Mother’, for which she won the BP Portrait prize in 2010. This image seemed to resonate quite intensely with the rest of the group.

“In 2007 my mother died at noon.
[The exhibition] was about loss
and departure, but also about transformation and freedom.
A spirit set free. My grief and her relief.

So I made the (film)stars and the gods weep for her.”

Marlene Dumas ‘For Whom The Bell Tolls’ –

I touched briefly on my own experiences with personal deaths being integral to my work; and I stressed the importance of anonymity. The conversation then turned to moral dilemmas in visual art, particularly when talking about personal themes in work.  At what point is it ‘acceptable’ to introduce who the sitter is, particularly if they are the person who is facing the realities of being mortal? Upon writing this post I realised that the anonymity could possibly be essential in the work due to the mystery – the tantalisation of the audience, leaving them wanting to know more. In my case it was both this and feeling uncomfortable with the thought of something personal being so open, which many artists find a difficult obstacle.

Andrew [Ross] and I also spoke about why we feel art relating to death needs to be made at all. I was asked what I would like from making the work, and whether it is something for myself or for the audience. My own opinion is that if the work was merely for myself, there would be no point in being a practising artist, as I would not be showing anybody my creations. I personally place an importance in the feeling of being ‘connected’ with others – that is, to be able to relate or empathise with certain situations or people, and in this case it is being able to ‘speak’ to those who have experienced grief, or being able to inform those that have not necessarily been as affected by it.